2019 promises the same, with pivotal sequels, live-action reboots, books adapted for the screen – and new, original movies that might just blow us away. 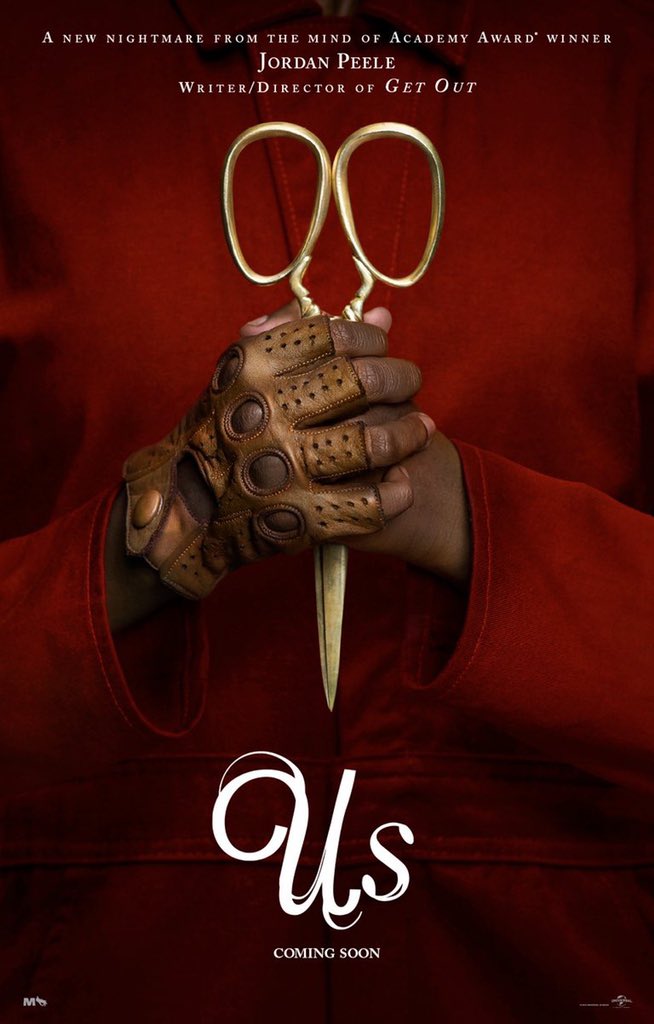 Starring Lupita Nyong’o and Winston Duke, Us is the story of a couple visiting a childhood home – but in true Peele fashion, it’s also a psychological thriller, a monster movie, and probably a welcome subversion of the horror genre.

Audiences didn’t know what to expect with Peele’s directorial debut Get Outblew away audiences and critics alike in 2017. This time around we consider ourselves prepared – if only for the collective gasps of our fellow theatergoers and to leave the experience feeling profoundly fucked up in the best way.

We don’t have any time to pretend we’re not shaking in our boots at the prospect of the fourth O.G. Avengers film. Thanos killed half of our friends and the rest are extremely traumatized and/or trapped in space! We gotta get rid of this guy and get our heroes back. Shoutout to Captain Marvel who will undoubtedly save the day and also has her own movie out just a few months earlier.

Chris Hemsworth and Tessa Thompson suit up as Men in Black agents in this prequel film about the organization that tracks aliens on Earth. Early behind-the-scenes looks (courtesy of social media) teased Thompson and Hemsworth falling into their established Ragnarok chemistry, and the trailer proves we’re in for another memorable romp with these two and some intergalactic enemies.

The fourth Toy Story movie will arrive a decade after its predecessor, a film so emotionally pitch perfect that we’re still recovering from its achievement. The toys will return for this enigmatic film, joined by an adorable spork with enough self-awareness to realize that he’s the one thing that’s not like these others.

We’ve been sweating with anticipation for this movie ever since the casting went public, and that jaw-dropping teaser only stoked the flames. In the words of a famous lion cub, we just can’t wait.

Andy Muschietti’s adaptation of the Stephen King horror novel was one of 2017’s unexpected hits, and though we’re terrified to journey back to Derry with adult Losers, we’re ready nonetheless. The cast is already out of Twitter’s dreams – including Bill Hader as Richie and Jessica Chastain as Beverly – with Bill Skarsgård reprising his role as voracious demon Pennywise.

Melissa McCarthy, Tiffany Haddish, and Elisabeth Moss team up as mob wives in the 1970s in this crime movie we somehow have to wait nine months for. The trio take over  the neighborhood after their husbands are taken into custody by the FBI.

The final installment of the trilogy that began in 2015 draws to a close with (hopefully) answers about Rey, Finn, Poe, and Kylo Ren – with the fate of the Jedi and the First Order shaping the future of our favorite distant galaxy.

This Ali Wong-penned romcom starring Wong and Randall Park stars the duo as childhood sweethearts who reconnect after 15 years apart. The cast includes Keanu Reeves, Daniel Dae Kim, Michelle Buteau, Deadpool‘s Karan Soni, and more. That’s literally all we know and enough for us to need it desperately.

FOLLOW US ON INSTAGRAM
Previous articleJapan was officially the best place to travel in 2018. Here are 15 photos that will make you want to visit ASAP.
Next articleAll the science fiction and fantasy books we’re looking forward to in 2019

Brad Pitt to suit up as Brioni brand ambassador

The ties between Brioni and Hollywood are growing ever closer as the years go by. Having called on the talents of Anthony Hopkins, Samuel...
Read more
Entertainment

(From left) Lizzo, Billie Eilish, and Lil Nas X The Grammys are screaming Cuz I Love You to Lizzo: The breakthrough singer-rapper scored a whopping eight nominations,...
Read more

Will artificial intelligence be the future of music?

Here’s the final trailer for Will Smith and Tom Holland’s ‘Spies...