Bakers From Baghdad, Who Fled Violence Against Christians, Pursue a Sweet Dream

SPRING VALLEY, Calif. — The marriage of Nael and Manar al-Najjar was forged in sugar.

Mr. Najjar grew up working in his family’s Baghdad sweet shop. When he proposed, three months after meeting his future wife at a family wedding, he traveled six hours to her hometown, carrying 15 boxes of confections: baklava, kenafeh and Turkish delights.

The couple settled in Baghdad, opened a bakery and started a family. As Catholics, though, they faced discrimination and threats of violence. When those threats turned deadly, they fled and sought asylum in America. 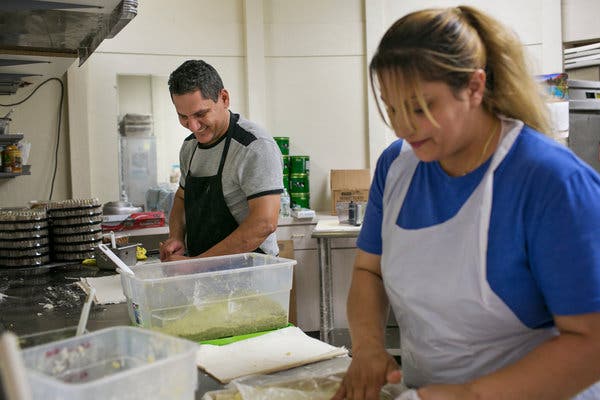 Since resettling, they have opened another bakery outside of San Diego. Running a sweet shop in Southern California requires a lot more than just baking skill, and the Najjars needed help. They got it from the International Rescue Committee, one of the eight organizations supported by The New York Times Neediest Cases Fund.

“Now we have a big name,” Mrs. Najjar beamed.

The Najjars met and married in 2002, a year before the United States and its allies invaded Baghdad. In the following years, Iraq’s Christian minority faced increasing persecution. Numbering roughly a million in 2003, the population was cut in half by 2010, as many Christians emigrated to escape the violence against them. 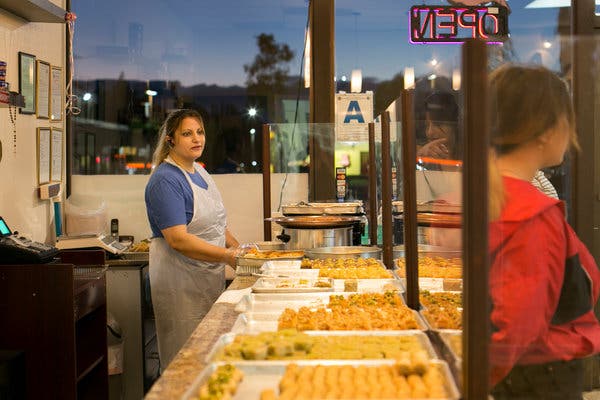 Amid the turbulence of life in Iraq during this period, the family still found its routine, running the bakery, raising the children. “We lived, like, no problem,” Mrs. Najjar said.

Sharing her husband’s skill in the kitchen, Mrs. Najjar often cooked at our Lady of Salvation Church, Baghdad’s main Catholic cathedral. On Oct. 31, 2010, six militants from the Islamic State stormed the church during evening mass. They fired assault rifles, lobbed grenades and — when Iraqi commandos stormed the church — detonated explosives strapped to their chests.

Running a sweet shop in Southern California requires a lot more than just baking skills, so the family sought help from the International Rescue Committee.CreditGabriel Ellison-Scowcroft for The New York Times 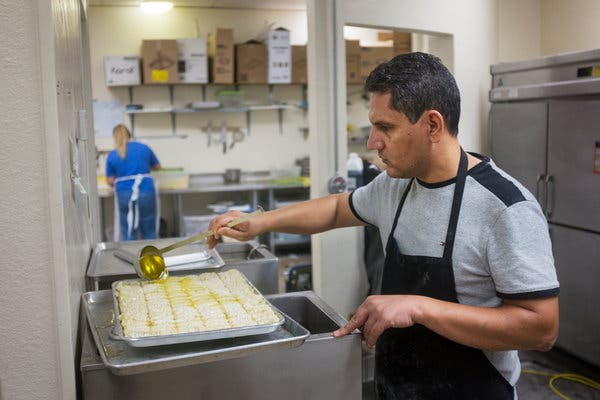 Running a sweet shop in Southern California requires a lot more than just baking skills, so the family sought help from the International Rescue Committee.CreditGabriel Ellison-Scowcroft for The New York Times

Fifty-eight people died in the attack. Among the victims were two of Mr. Najjar’s relatives, one of them an infant.

Two weeks later, Mrs. Najjar, who had not been at the church during the attack, found a note slipped under the front door of the family’s home. It said, “We’re going to kill you,” she recalled recently.

Their children were 4 and 2 years old at the time, and the Najjars decided they needed to pack up the family in a few suitcases and join the exodus of Iraqi Christians fleeing to northern Iraq, then to Turkey.

Once there, the Najjars initially settled in Usak, a provincial capital in eastern Turkey, where Mr. Najjar quickly found a job at a bakery. Soon after, they applied for asylum in America. It was granted in 2014, and the family moved to the San Diego area, where the parents worked in bakeries for three years and dreamed of again opening their own. 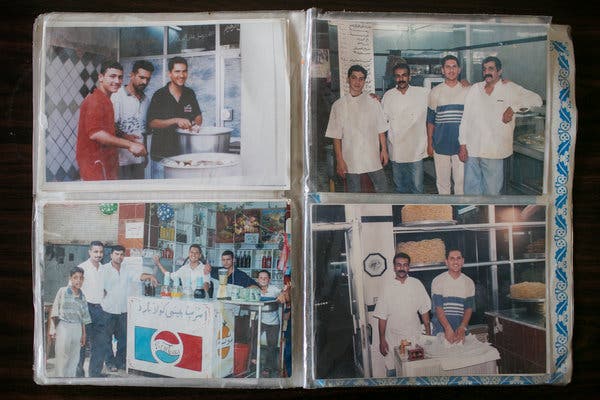 “We wanted to make something together, something strong,” said Mrs. Najjar, 38. “It is my dream and my husband’s dream.” 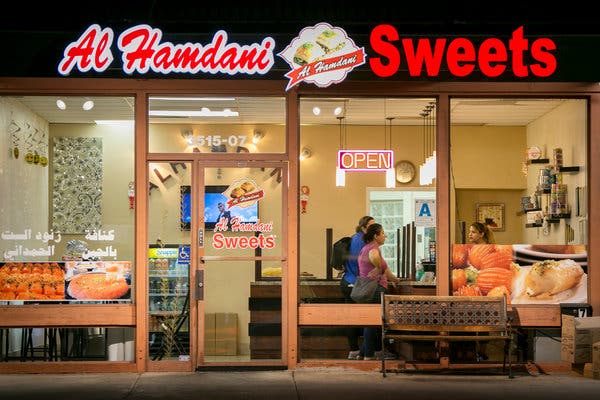 Their experience running a bakery in Baghdad, though, went only so far in Spring Valley. Taxes, permits, health codes and other regulations proved challenging. “In Baghdad, you don’t have taxes,” Mr. Najjar, 43, said in the back room of the shop, with Turkish delights on the counter and stacks of trays and pastry boxes piled up around him.

As the Najjars tried to keep their business, named after the town where the couple married, going after a slow start, the International Rescue Committee helped the Najjars navigate the unfamiliar rules and manage their finances. 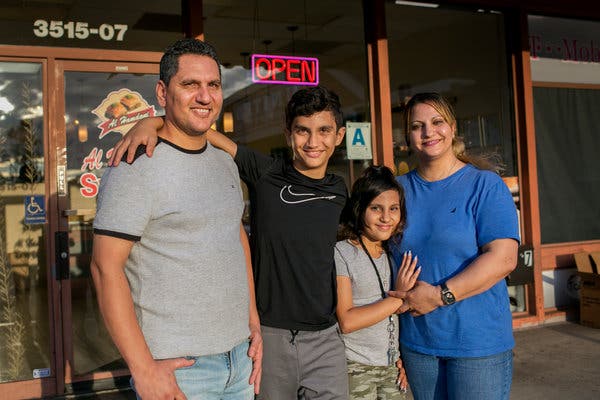 “I.R.C. helped so much,” said Mrs. Najjar, who kept her Bluetooth device in her ear throughout an interview last month. “They make everything easy.”

Some of the shop’s baking equipment was purchased through funds from the committee’s individual development accounts program, a saving program that, in March, matched $4,000 of the couple’s business income.

Financed by three-year federal grants, the program is intended to ease refugees into the economy by helping small-business ventures. Over the past three-year cycle, it has enrolled 115 clients in the San Diego area, matching almost $420,000 in savings, said Fadi Amin, a committee coordinator who worked with the Najjars. Funds are used to help buy assets, like a house, business equipment or a car. (The Najjars just purchased a new Toyota Sienna, which Mrs. Najjar uses to make deliveries.)

In a separate loans program, the organization doled out more than $1.4 million nationwide in 743 small-dollar loans from July 2016 to September 2018. Most borrowers were from Syria or Iraq.

More than a year in, business at the Najjars’ shop is good, with a steady stream of customers, many from a nearby hookah lounge. They have hired two employees. A wide variety of sweets, which Mr. Najjar bakes daily, are sold at local grocery stores and a university, and wholesalers in Sacramento and Seattle buy them, too.

Early next year, the family will be eligible for citizenship, and they plan to apply. The couple’s two children, now 13 and 10, enjoy school and sometimes help at the bakery.

In the back room, Mrs. Najjar scrolled on her smartphone through photos of the children, laughing and covered in flour. Others were taken at SeaWorld, where the family has an annual pass.

“Here, my children have a good future,” she said.

Whether you like fast food or not, you cannot ignore the inviting fatty and salty aroma that flows through the air as you drive...
Read more
Food & Drink

Airlines have found innovative ways of generating revenue, given the ongoing Covid-19 pandemic. Thai Airways has opened an airline-themed restaurant at its headquarters in...
Read more
Food & Drink

Many restaurants around the world are slowly opening up again, but they still have to ensure customers stay a safe distance apart. Last week,...
Read more
- Advertisment -