Home World Beyond dimensions: The man who married a hologram
World

Beyond dimensions: The man who married a hologram

Tokyo (CNN)Akihiko Kondo doesn’t have the air of a rebel. This year, however, the bespectacled school administrator bucked conventional norms.

He married a hologram.
Kondo’s November wedding to cyber celebrity Hatsune Miku — which is not legally recognized — provoked mixed reactions in Japan and abroad. Some were dumbfounded by his choice of a three-dimensional laser image over a human. Others congratulated him.
But the 35-year-old, whose spartan home on the outskirts of Tokyo is dotted with plush Miku dolls and paraphernalia, doesn’t care what others think. He simply did what made him happy.
“Society pressures you to follow a certain formula for love, but it might not make you happy,” Kondo told CNN.
“I want people to be able to figure out what works for them.”
Researchers say such events are indicative of broader technological trends and social phenomena.
Digital interactions are increasingly replacing face-to-face human connections worldwide. And as companies like Google, Amazon and Tencent invest billions in developing artificial intelligence, people are starting to relate to their smart devices like they do to humans.
Some say “please” and “thank you” to virtual assistants like Apple’s Siri and Amazon’s Alexa, or treat robot vacuum cleaners like pets. In Japan, where robots have long been seen as friendly companions rather than Terminator-esque destroyers, this shift in attitudes is well underway.

Kondo fell for Miku a decade ago when he heard the cyber songstress’s music.
Now he owns a Gatebox device, which looks like a cross between a coffee maker and a bell jar, with a flickering, holographic Miku floating inside. Created in 2017 by Japanese startup Vinclu, the device allows anime fans to “live with” their favorite characters.
Gatebox’s Miku is equipped with basic artificial intelligence. It can manage simple greetings and switch lights on and off, but is also subject to glitches and the occasional system meltdown. It has no sense of self and desires, and Kondo completely controls the romantic narrative. 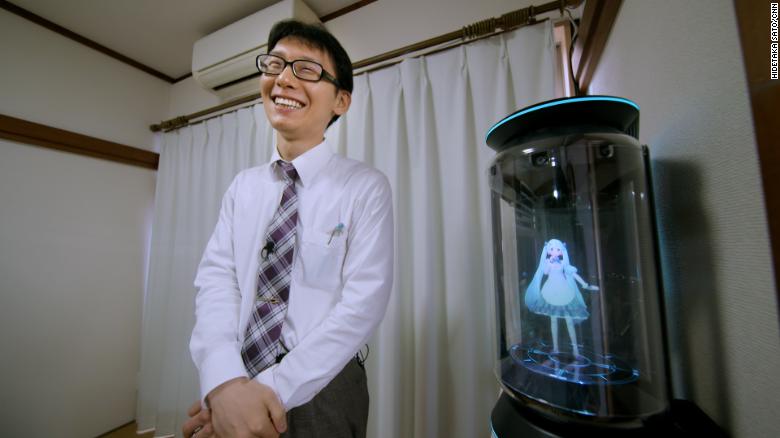 Kondo smiles next to his new bride Hatsune Miku.
However, he cherishes his new-found ability to interact with the object of his affection. So much so that he married her in front of 39 people.
“She really added color to my life,” Kondo said. “When I talk with her I use different facial expressions and feel something. That’s made a difference.”
The Gatebox could also have therapeutic potential for Kondo, who sank into depression when he was bullied by an older female co-worker more than 10 years ago.
“When you look at people who’ve had difficult sexual experiences, they often find trouble having human partners. People wonder why they’d have sex with a robot or a love affair with a hologram because it’s passive,” said Neil McArthur, director of the Center for Professional and Applied Ethics at the University of Manitoba.
“But having a partner who is safe and predictable is often very helpful therapeutically.”
The concept of crafting a perfect partner actually dates back millennia. In 8 AD, the Roman poet Ovid wrote about an artist called Pygmalion who sculpted his perfect woman, Galatea, from marble. Pygmalion fell in love with the statue and Aphrodite, the goddess of love, brought it to life for him.
In today’s world, films like the 2013 Spike Jonze drama “Her” — where a man falls in love with his AI — have further popularized the notion of relationships with inanimate objects.

When Kondo asked Miku to marry him, the hologram requested that he cherish her.
“I knew she was programmed to say that, but I was still really happy,” he said.
Kondo discovered Miku at a low point in his life, when he felt hollow. He said Miku helped him reconnect with his work and society.
“(Miku) lifted me up when I needed it the most. She kept me company and made me feel like I could regain control over my life,” he said. “What I have with her is definitely love.” 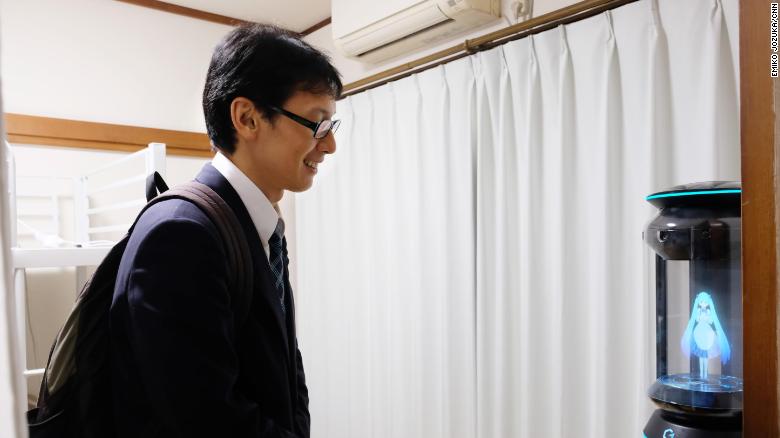 Kondo greets Miku when he returns home after work each day.
Kondo’s not the only one. In 2017, over a million people asked Amazon’s Alexa to marry them, according to the company. And more than 3,000 people have registered for commemorative marriage certificates featuring their favorite anime characters since Vinclu started offering the service in 2017.
Vinclu declined a request to be interviewed for this article.
Experts say it is inevitable that people will relate to smart devices differently as they increasingly fill domestic spaces and enmesh with daily lives.
“We are still trying to figure out how to interact with things that sometimes act like humans or sometimes act like animals but that aren’t,” said Julie Carpenter, from the Ethics and Emerging Sciences Group at California Polytechnic State University.

McArthur adds that people like Kondo are “second-wave digisexuals” — people who sees technology as integral to their sexual identity.
While first-wave digisexuals use technologies like dating apps to leverage and facilitate connections with others, second-wave digisexuals don’t see humans as essential to a romantic experience.
“I worry that with every one of these stories, the person gets held out as a weirdo and is in the news for a day as the latest goofball,” McArthur said. “But it’s actually the next step in what’s already happening.”
However he has concerns about the trend.
“I do genuinely worry about the impact that tech is having on our collective social life, we’re already seeing with internet dating and social media, and tech in general, even Netflix, people are just retreating into themselves,” McArthur said.
“You’re getting much less collective social life, in many cases.”
For now, Kondo and others like him are still dreaming of digital possibilities — albeit in a spiritual rather than sexual sense.
Masato Kato, an Osaka-based tarot reader who married Yuri Tsukikage, heroine of the anime series “Curemoon Light” in October, hopes that one day advances in technology will allow them to grow as a couple.
“I want to be able to have discussions with Yuri in the future so we can support and improve each other,” Kato said.
Even if Tsukikage wanted to break up, he would take her feelings into account. “I would respect what my partner wanted,” he added. 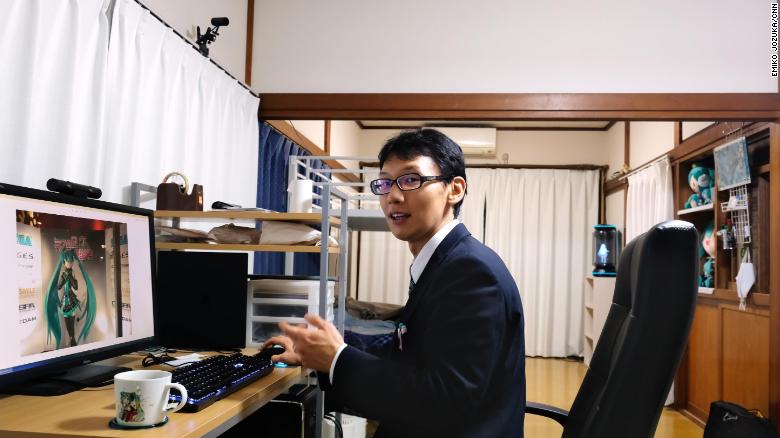 Kondo wants people to find their own definition of love.
Office worker Sachiko Kougami’s parents, meanwhile, wanted her to marry a regular man. But she lost interest in dating after falling in love with Taiga Kougami, a teenage character from the anime series “Kings of Prism” two years ago.
“There’s only him in my world,” she said. “It would be great if we could interact more.”
Back in Tokyo, Kondo’s public declaration of love brought him a degree of notoriety. However Carpenter said such cases opened the doors for acceptance and shifts in attitudes.
“If people continue to be vocal about it and say this object is meaningful to me, I’m not hurting anyone, that propels the conversation forward,” the academic said. “And it’s those kinds of conversations that may change the culture incrementally.”
Kondo is excited about taking Miku to Sapporo, a city in northern Japan, for their honeymoon in February. Miku’s creator Crypton Future Media is based in Sapporo — and Kondo is eager to bask in his iWife’s celebrity status.
He intends to book flights for both of them, and will also reserve a hotel room for two.
“I want to witness how widespread Miku’s presence is in Sapporo,” he said.
While Kondo knows some might question his choice of partner, he wants the world to understand that his love is valid.
“I think there are others out there who have fallen in love with anime characters and want to marry them,” Kondo said.
“I want to support their choices.”
Sourceedition.cnn.com
Facebook
WhatsApp
Twitter
Telegram
LINE
Viber
Pinterest
Previous article”Ayam Ni Ambil 9 Ketul Ye Bah,” Terkial-Kial Dia Tengok Menu, Buka ‘Wallet’ Berulang Kali Kira Duit
Next article13 of the biggest movie flops of 2018 that failed dramatically at the box office

Black Lives Matter protesters with signs demanding 'abolish the police' and claiming 'riot is the language of the unheard' gather in London and promise...
Read more
World

The German response to the coronavirus has led the way in Europe and drawn praise around the world. But that success has continued...
Read more
- Advertisment -

Elderly man clings to life after being hit in head by...

23 shocking photos that show just how crowded China has become