El Chapo’s secret messages to his wife and lover revealed

NEW YORK: Prosecutors trying Joaquin ‘El Chapo’ Guzman opened an extraordinary window Wednesday into the intimate life of the Mexican drug lord as he plotted crime deals with his wife and a lover while doting on his twin daughters.

Jealous and paranoid, Guzman spied on both his beauty queen wife, Emma Coronel, and the lover, Agustina Cabanillas Acosta, using a surveillance system installed in the encrypted Blackberries he gave them.

The FBI, it turns out, also had access to his communications, after recruiting the computer expert who installed the FlexiSpy surveillance system.

Read out in court, text messages between Guzman and the two women recorded them discussing major cocaine shipments but also more mundane things, like the kids.

“Our Kiki is fearless,” Chapo jokes to his wife in one message in January 2012, referring to one of their twin daughters, Maria Joaquina, now seven. “I’m going to give her an AK-47 so she can hang with me.” 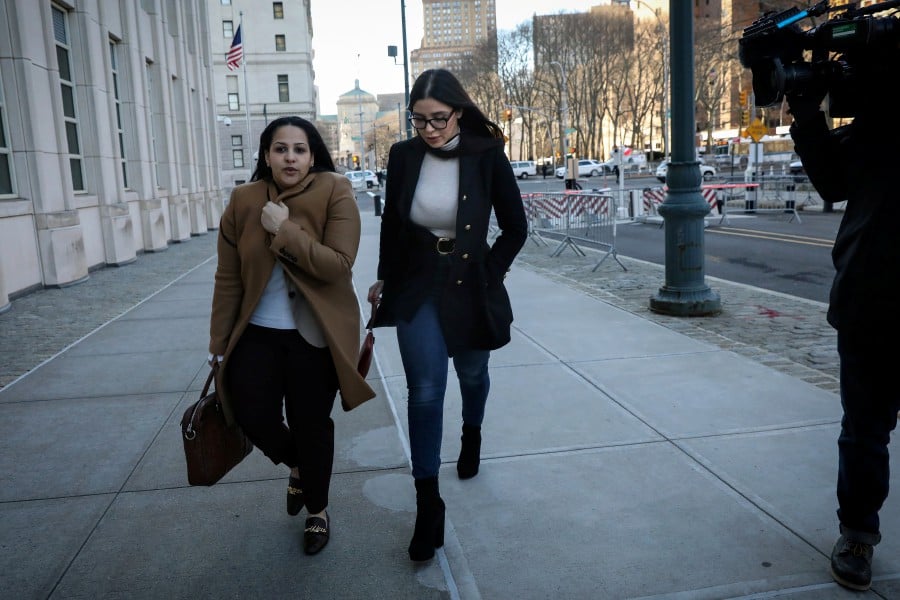 Emma Coronel Aispuro, the wife of Joaquin Guzman, the Mexican drug lord known as “El Chapo”, arrives at the Brooklyn Federal Courthouse, for the trial of Guzman in the Brooklyn borough of New York. – Reuters

The 29-year-old Coronel, who married Guzman while still an adolescent, was in court as the messages were read out.

She listened with a serious expression, avoiding eye contact with anyone but her 61-year-old husband, who waved to her several times during the proceedings.

Chapo’s nickname for his wife was “Reinita Coronel,” or “RC” and the girls were “reinitas,” or little queens in Spanish.

The couple discuss the children, a US$12,000 watch he gave her that she wanted to return, and a drug shipment across the border that Coronel’s father is involved in. She also asks him for money for plastic surgery.

Guzman, whose trial began two months ago, faces life in prison if convicted of smuggling 155 tonnes of drugs into the United States as the head of the Sinaloa cartel.

He was extradited to the United States nearly two years ago after twice escaping from prison in Mexico.

While on the run, he was nearly captured in Los Cabos, a Mexican resort town, on February 22, 2012, escaping minutes ahead of the police.

The same day he sent a text to Emma, asking her to quickly send him two pair of black shoes, jeans, shampoo – and “black ink for the moustache.”

Although Guzman escaped, three others were captured, including Cabanillas, his lover and partner in crime who was known as “Fiera,” Spanish for Wild Beast.

The text messages read out in court suggest she was particularly close to him.

They discuss the formation of two companies – a chemical fertilizer business in Germany and citrus firm in Ecuador – with the aim of exporting drugs to “Europe, Canada, Australia and also the United States.” In another exchange they talk about buying between 630 and 700 tonnes of cocaine in Belize.

They address each other as “Love” in the texts. The evidence shows she had liposuction performed at his expense.

“I adore you,” Guzman tells her. “You are the most important person to me.”

But in a text to a friend, Cabanillas dismisses Guzman as an “idiot.”

“I don’t trust these BlackBerries, the ones he gives me over here, because the b*****d can locate me.”–AFP

Anti-lockdown protesters in Michigan brought rifles and weapons into the state...