Home Entertainment Long lines, lots of kids, and plenty to touch: How does Disney...
Entertainment

Long lines, lots of kids, and plenty to touch: How does Disney reopen its parks?

(Reuters) – For a glimpse at how Disney recovers from the coronavirus pandemic, look no further than Shanghai, where the entertainment giant has staged a limited reopening of Shanghai Disney Resort. Adults, kids and senior citizens wear masks while wandering among staff and security guards who carry contact-less thermometers and hand sanitizer.

As some U.S. states lift stay-at-home orders, investors and park fans are watching to see how Walt Disney Co — which makes a third of its revenue from parks, experiences and products — reimagines the “happiest place on earth” for a world altered by the coronavirus.

The high-touch, high-volume, kid-centered nature of the parks, and Disney’s need to prevent damage to a brand synonymous with safety and families, will make reopening difficult, experts said.

Disney’s ability to reopen its parks in Asia, the United States and France will also be a powerful signal about how the world can get back to a semblance of normal as it deals with COVID-19.

“This is the greatest challenge that the industry has ever faced,” said Phil Hettema, founder of The Hettema Group, which designs theme park rides and other experiences.

Disney, which has not announced any plans to reopen the parks, declined to comment for this story.

Executive Chairman Bob Iger recently said checking guests’ temperature could become routine at Disney park entrances. Among other plans under consideration, according to a source briefed on Disney’s thinking: Rides like the Space Mountain roller coaster could stagger guests in each “rocket” to enforce social distancing. Guests could be notified via app or another technology when they can go on a ride or in a restaurant to eliminate lines.

Staffers, known as cast members, and guests could be required to wear masks. But in true Disney fashion, employees’ masks would be fun, not scary, the source said.

Disney on Thursday began online sales of face masks featuring Mickey Mouse, Baby Yoda and other characters and said up to $1 million in profits would go to charity.

Masks, now worn commonly across China, are ubiquitous in the shopping district outside Shanghai Disney, where workers disinfect a playground for 5- to 12-year-olds at noon and 3 p.m. daily. Temperature checks are mandated by local regulations, according to Shanghai Disney’s website. 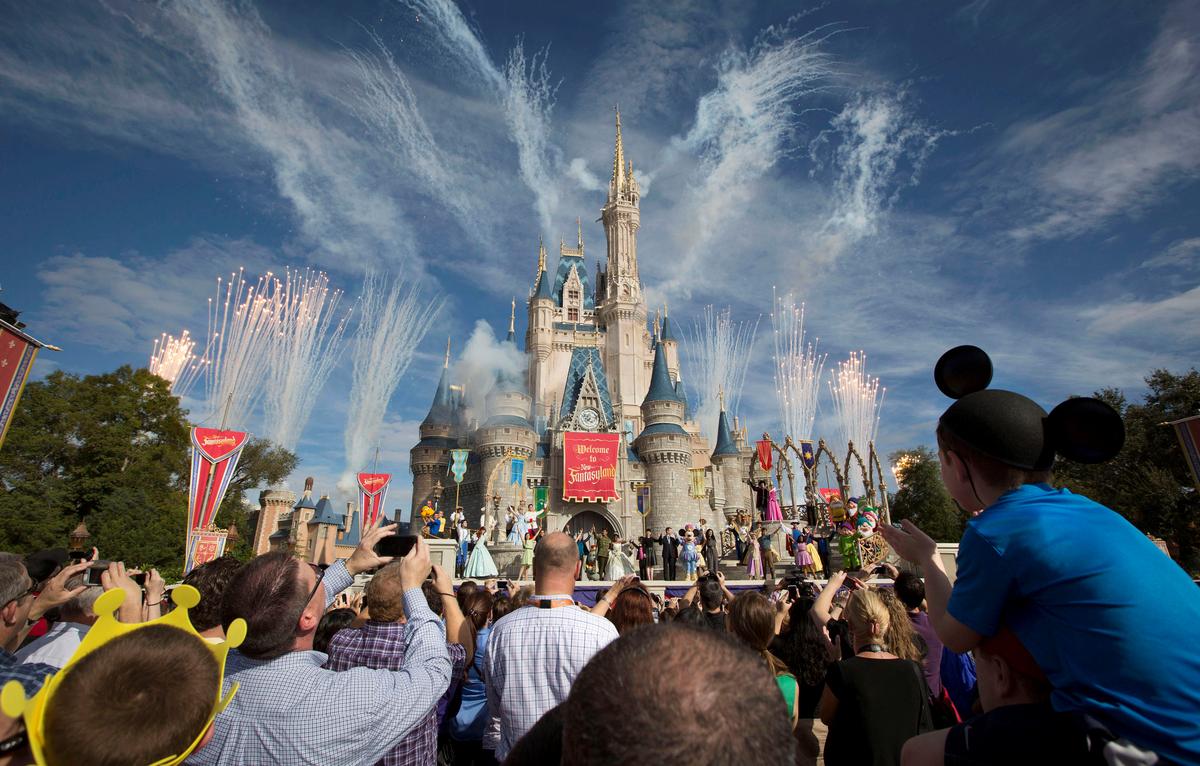 Business and political leaders in Florida, home to Walt Disney World, have floated ideas such as limiting capacity at all theme parks during an initial re-opening phase.

The question that health experts and financial analysts are asking is whether any of these measures will be enough to protect employees, guests or Disney’s bottom line.

Social distancing could come at a steep price.

Disney parks need to be running at roughly 50% of capacity to be profitable, according to the firm.

Investors will see a fuller impact of coronavirus when Disney releases its second-quarter results on May 5; Comcast said on Thursday that if its Universal Studios parks remain closed for the entire second quarter, the company would suffer an earnings before interest, tax, depreciation and amortization loss of roughly $500 million.

Financial analysts have predicted reopen dates for Disney ranging from as early as June to Jan. 1. Guidelines will be set by governors in California and Florida, where Iger and Walt Disney World Resort President Josh D’Amaro sit on state reopening task forces. The rest is up to Disney.

Although Disney and other large venues face an unprecedented challenge protecting guests from an easily spread airborne virus, experts and a former executive pointed to its experience handling crowds.

More than 157 million people visited Disney parks in 2018, according to the Themed Entertainment Association.

“If anybody can figure it out, Disney will,” said Dave Schmitt, founder of MR-ProFun, a consultant to theme parks.

Safeguards have limits. Temperature checks will not catch everyone infected, and most vaccines are not 100% effective, said Dr. Megan Murray, a global health professor at Harvard Medical School.

Even so, a vaccine would provide some reassurance for park-goers, according to a Reuters/Ipsos poll conducted from April 15-21. While a fifth of respondents said they would attend an amusement, theme or water park whenever they reopen, about 30% would go if a vaccine was available. The poll, which surveyed 4,429 American adults, noted that a vaccine might not be available for more than a year.

“It’s just the feeling that they do things so perfectly and they will take every precaution,” Alexis said. “They’re not going to want to have an epidemic where everyone gets sick at Disney. They would never let that happen.”

Fred Willard, the beloved comic and actor who kept Hollywood laughing with roles in This Is Spinal Tap, Waiting for Guffman, Best in Show, A...
Read more
Entertainment

Adele showed off her incredible seven stone weight loss in a tight black mini as she shared a rare Instagram post on Tuesday. The Hello singer...
Read more
- Advertisment -