Luxury hotel built in former pit mine to open in China

1 of 2 This Nov. 13, 2018, aerial photo and released on Thursday, Nov. 16, 2018 by Xinhua News Agency, shows the Intercontinental Shanghai Wonderland Hotel in Songjiang district of Shanghai, east China. The 18-story hotel has been built into the side of a huge hole in the ground left by a former put mine with sixteen of its floors below ground level. (Fang Zhe/Xinhua via AP)

A luxury hotel opening outside Shanghai is offering guests with deep pockets the chance of a very deep sleep. 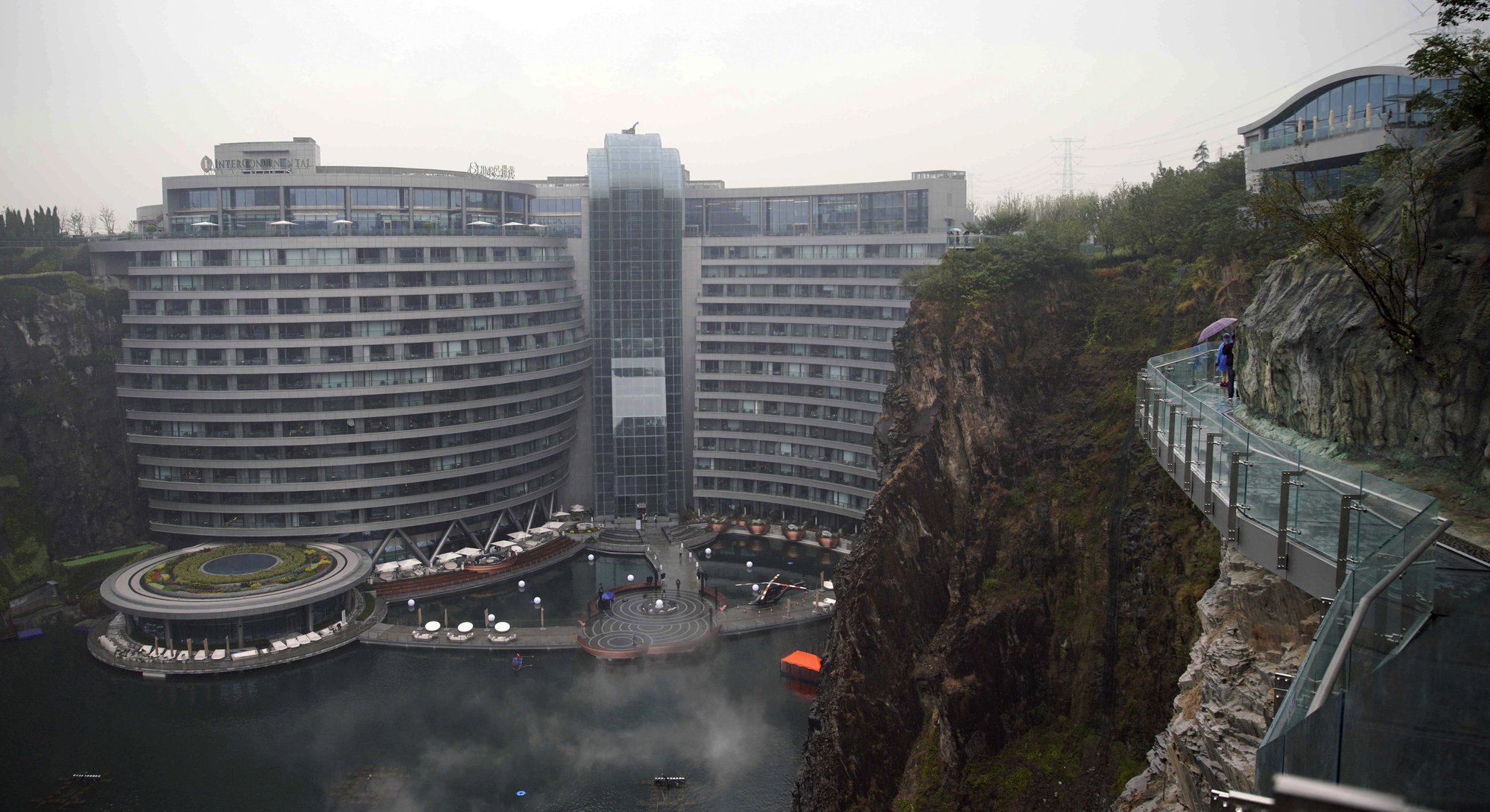 Visitors walk near the Intercontinental Shanghai Wonderland Hotel in Songjiang district of Shanghai, east China, Thursday, Jan. 15, 2018. The 18-story hotel has been built into the side of a huge hole in the ground left by a former put mine with sixteen of its floors below ground level. (AP Photo)

The 18-story Intercontinental Shanghai Wonderland Hotel has been built into the side of a huge hole in the ground left by a former pit mine. Sixteen of its floors are below ground level, looking out onto the rest of the former quarry. Two floors are underwater.

“I designed many different types of buildings in U.K., in Europe, in Dubai, and so on but this one was totally different and became almost life work, so that’s why I’m saying it’s probably the most important building that I have designed,” said chief architect Martin Jochman, who is known for the sail-shaped Burj Al-Arab skyscraper in Dubai.

The project began in 2006 and construction got underway in 2013. The team faced delays and a host of technical challenges, including meeting strict earthquake regulations and maintaining water levels.

“It’s a model that has been inspired by a vision of a better future, and a present that looks to its past for answers,” he said at a news conference introducing the hotel Thursday.

“We could have abandoned this quarry,” said Xu Shitan, vice chairman of Hong Kong property developer Shimao Group, which developed the hotel. “But we didn’t. We turned it into a treasure.”

Photo: Stock Photos from cowardlion/Shutterstock Like most public-facing places, the Ghibli Museum in Mitaka had to temporarily close due to COVID-19. However, anime fans can still have a...
Read more
- Advertisment -

Getting on board: 10 reasons to consider a cruise trip

Knocking on death’s door at the Bangkok Forensic Museum