Huffpost) – Pauline Ngarmpring thought she would take it slow as she began her new life as a transgender woman after transitioning at the age of 49.

Instead, three years on, she is a candidate for Thai prime minister – the country’s first transgender candidate for the post – and her days and nights are filled with campaigning, strategy meetings and media interviews.

It is an unexpected turn of events for the former news reporter turned sports promoter, who has quickly embraced her role as an ambassador for LGBT+ rights and gender equality in a country with few openly gay or female political leaders.

“Politics was my interest for a long time, and as a man, I was often invited to join a political party. But I was not in the right frame of mind until after I transitioned,” she said.

“As a woman, I am comfortable and have nothing to hide. I am ready, but are people ready to accept a transgender candidate?”

Thailand will hold a general election on March 24, its first since a military coup in 2014.

The contest looks set to be a showdown between the military-backed, royalist Prime Minister Prayuth Chan-ocha and supporters of exiled former premier Thaksin Shinawatra.

Ngarmpring – who goes by her preferred name Pauline – is one of three candidates for prime minister from the Mahachon Party, and is not considered a front-runner.

But Thailand’s LGBT+ community is hopeful that she – and the nearly 20 other LGBT+ candidates for parliament that the Mahachon Party is backing – will help focus attention on their challenges and their abilities, an activist said.

“Her candidacy is significant because she is challenging the traditional norms of gender and sexuality,” said Anjana Suvarnanda of the Anjaree Group, an LGBT+ rights organization.

“While we have had LGBT people in Thai politics before, no one has asserted their LGBT identity in such a public manner, and there has been no public discussion with such a positive approach,” she told the Thomson Reuters Foundation. 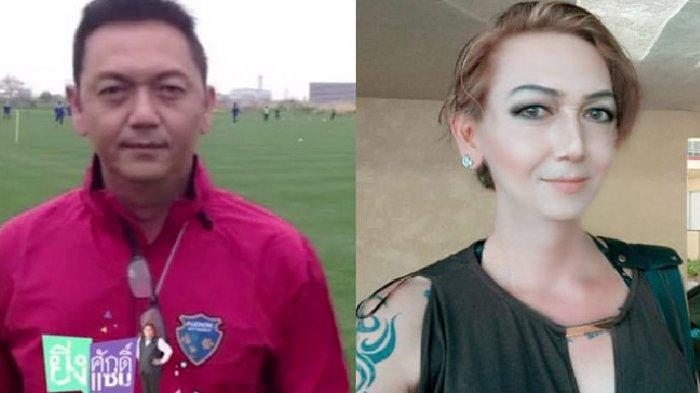 Thailand has built a reputation as a place with a relaxed attitude towards gender and sexual diversity since homosexuality was decriminalized in 1956.

The largely conservative Buddhist society is set to pass a landmark law that would make it among the first countries in Asia to legally recognize same-sex couples as civil partners.

Yet, LGBT+ people face discrimination and stigma in schools, the workplace and health facilities, and are often rejected by their families, activists said.

For transgender women, the barriers are particularly high.

Ngarmpring, who underwent a sex-change operation in the United States, and spent three years there during her transition, considers herself lucky.

“I was fortunate because I had already had a long and successful career as a man before I transitioned,” she said.
“Otherwise, transgender people do not have many job opportunities, and are forced to work in the entertainment or hospitality industry,” she said.

Opportunities in politics are even more limited.

While their numbers are rising, openly gay politicians still face discrimination and even death threats in some countries.
Women are only slightly better off: the global average for the number of women in parliament is 24 percent – well below the 30 percent benchmark considered as the satisfactory level of representation, according to United Nations Women.

In Asia, the average is 20 percent, while in Thailand it is just 5 percent, among the lowest in the world.

“Women are not taken seriously in Thailand; there have been some women politicians, but it’s very difficult to enter politics without family connections,” Ngarmpring said.

Thailand has had one female prime minister – Yingluck Shinawatra, sister of Thaksin – and of the nearly 70 candidates for prime minister this time, seven are women.

Women are impeded by discriminatory laws, harassment and violence, fewer contacts and resources, as well as cultural and social norms, said Allison Davidian at UN Women in Bangkok.

“These factors all continue to create an environment that is often hostile to women’s engagement in politics,” she said.
“But from climate change to conflict, as we face the growing challenges of the 21st century, we cannot afford to exclude the perspectives and skills of women in political life.” 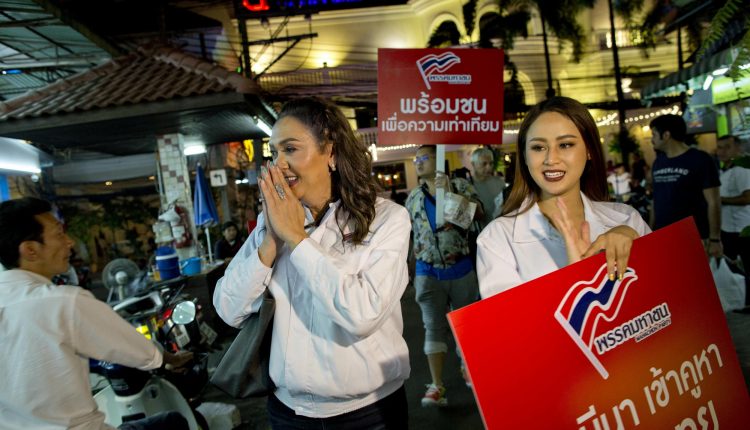 The Mahachon Party is campaigning on an agenda of human rights and equality across gender, social, economic and political lines.

Its manifesto includes decriminalizing sex work and greater LGBT+ rights, including changing one’s gender on official documents, which Thailand does not permit now.

As a transgender woman, Ngarmpring said she has a unique perspective on challenges faced by women and LGBT+ people.

“Because of my public profile, people who are in the closet look at me as an inspiration, and sometimes send me messages,” she said as she ate a dinner of rice and spicy pork in a restaurant before a campaign tour in Bangkok.

“I tell them: take your time, it’s not about what other people think, it’s about being clear to yourself. It took me 40 years to admit to myself I was born a woman,” she said.

Hired by the Mahachon Party to work on their strategy and policy initially, Ngarmpring on Feb. 8 posted on her Facebook page that while she was transgender, she was exercising her right as a Thai citizen to run for office.

“The road is long, but if we don’t start today, our children who may be transgender, gay, male or female, or don’t know themselves and don’t know their rights … how will they have equality?” she said.

About 14 percent of the electorate, or 7 million people, are eligible to vote for the first time in Thailand, a factor that analysts said may favor candidates who are not a part of the old guard, and who promise a new way of governing.

As she made her way around the busy streets of Khlong Toey, Bangkok’s largest open market and slum, Ngarmpring handed out name cards, introduced herself, answered questions, and posed for selfies with vendors and shoppers.

Dressed in the party’s colors of white and blue, she was accompanied by about half a dozen supporters carrying placards.

Most people failed to recognize Ngarmpring – and that is fine by her, for now.

“I know having my candidacy is a symbolic gesture. I know I will not be prime minister now,” she said.

“But we hope we will get some seats and represent LGBT people in the country. And perhaps next time, even a transgender woman will have a chance.”

(FilePic) A soldier from the Chinese People's Liberation Army (PLA) jumps through a ring of fire during a military exercise in Shihezi, Xinjiang Uighur...
Read more
World

Pix for representational purpose only. KABUL: Five Afghans were killed and a Japanese aid worker wounded Wednesday in an attack in Jalalabad city in the eastern...
Read more

Heres what you missed this weekend: The US government shut down,...

Decision not to ratify Icerd made much earlier, says Mahathir