The legacy of Islamic Cairo’s most famous son Naguib Mahfouz lives on in its winding lanes more than three decades after he became the only Arab to win the Nobel Prize for Literature.

A mosaic of the bespectacled author overlooks a market teeming with children on bikes, waiters balancing trays of hot drinks and shoppers haggling with hawkers over the price of meat.

It could be a scene straight out of a typical Mahfouz novel focusing on the minutiae of life in the Egyptian capital, with its satirically political overtones and timeless characters.

After years in the making, a museum in the writer’s honour opened in July this year.

A new translation of previously unpublished Mahfouz work is also in print, underscoring 13 years after his death the mark he made both on world literature and on Egyptians themselves.

In November, young writer Ahmed Mourad sparked controversy in Egypt when he suggested that the quality of Mahfouz’s work needed to be adapted to make it more contemporary.

The backlash at this tarnishing of the great man’s reputation forced Mourad to go on the popular television talk show circuit to clarify his comments. 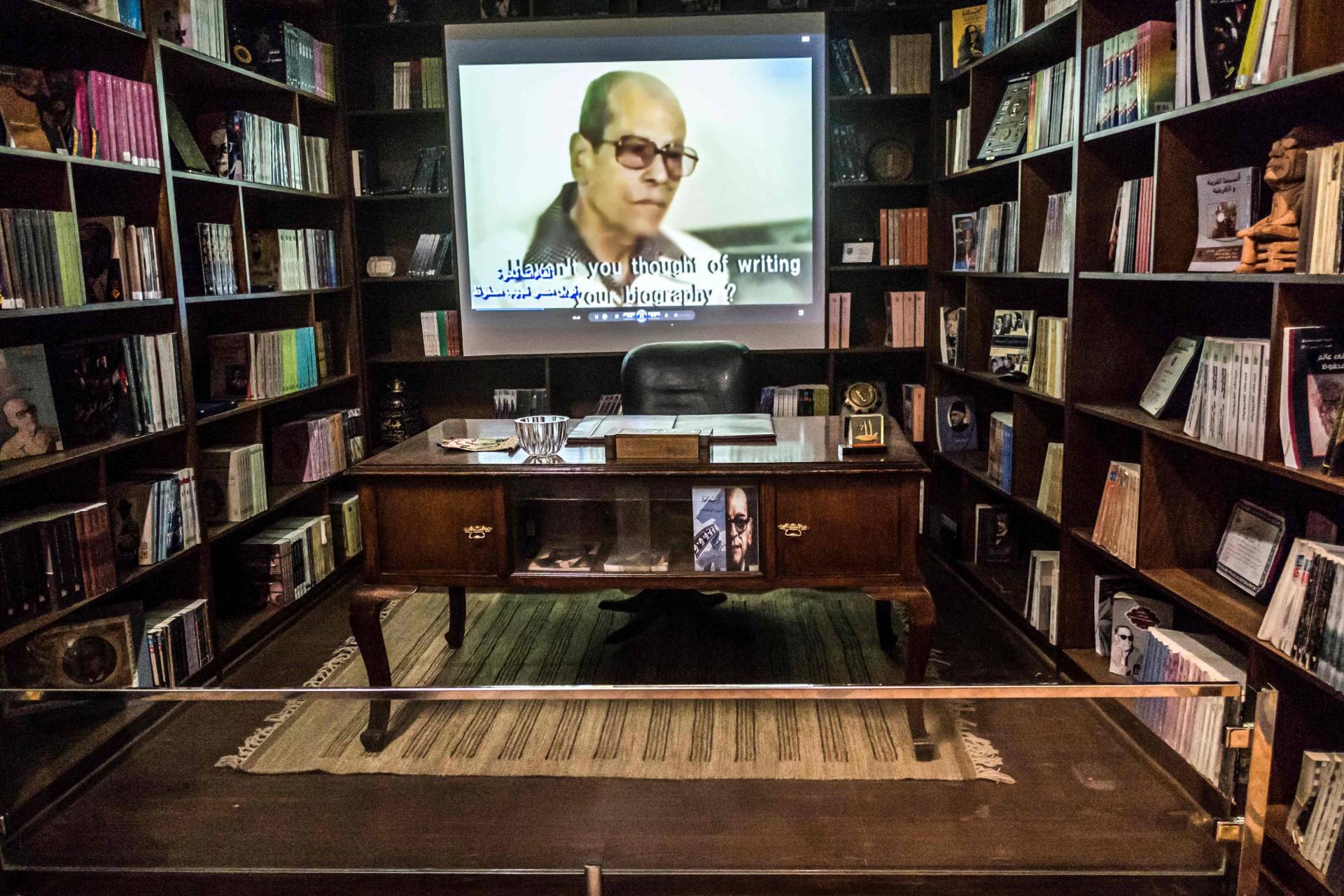 The desk of Egyptian novelist and nobel prize winner Naguib Mahfouz displayed at his museum at al-Azhar district in the heart of the capital Cairo. Photo: AFP

Mahfouz is considered to be the father of the modern Arabic novel: he broadened its literary range by pushing through sacred red lines including religious taboos.

And he was nearly killed for doing so. In 1994, a knifeman stabbed him in the neck in an assassination attempt.

The attacker had been acting on a fatwa or religious edict issued by radical Egyptian-American imam Omar Abdel-Rahman, denouncing what he deemed to be the prodigious author’s blasphemous prose.

Mahfouz’s daughter Om Kalthoum said he was so deeply enmeshed in the chaotic energy of Cairo that the city itself was a major character in his work.

The writer’s routine included walks along the corniche by the Nile to his favourite cafes near Tahrir Square, epicentre of the 2011 revolution, and to cultural salons.

“He wrote about Cairo with true love. He described it in granular detail. Even if he criticised it, it was still full of love,” she said.

She and her sister accepted their father’s 1988 Nobel Prize on his behalf because of his inability to travel due to his deteriorating eyesight.

Om Kalthoum said: “I remember sometimes we used to go to Al-Hussein (the area around the Al-Hussein mosque in the heart of Islamic Cairo) and we’d sit in the cafe bearing his name,” the Naguib Mahfouz Cafe.

“He showed us Midaq Alley – it was pretty much the size a small room – and he would tell us great stories about his days as a schoolchild,” she recalled.

Midaq Alley was one of his most widely read books globally and was adapted into a 1995 film starring Salma Hayek. 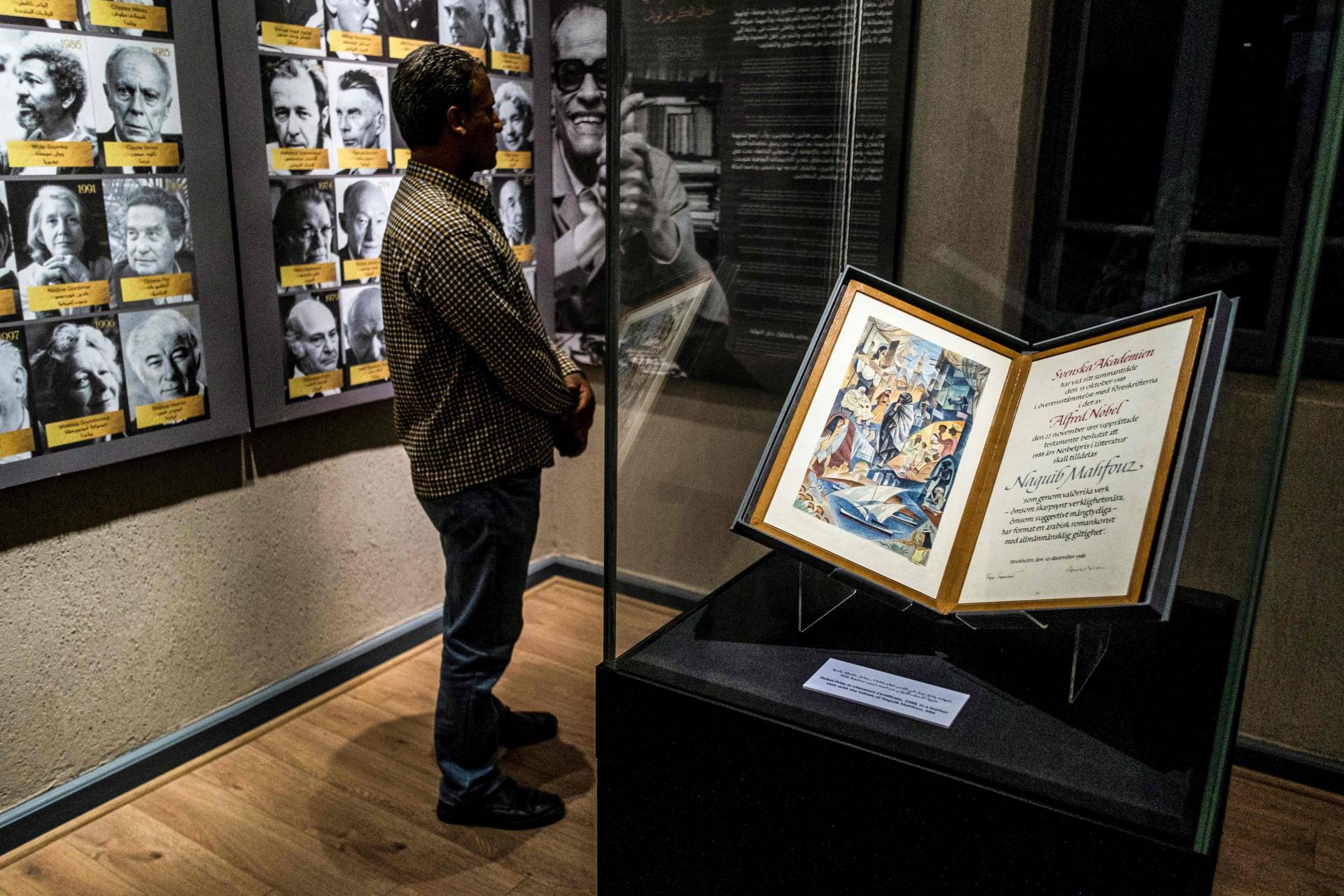 The Nobel Prize certificate of Naguib Mahfouz displayed at his museum in Cairo. Photo: AFP

The site of the museum dedicated to him is in a beautifully restored Ottoman guesthouse in Islamic Cairo dating to 1774, and was chosen because he spent his early years there.

In the Al-Gamaleya neighbourhood the budding writer was surrounded by 10th century walls and a myriad of hiding spots for curious kids.

Om Kalthoum noted that being raised there left an indelible mark on her father’s imagination.

Mahfouz’s precious belongings including his mahogany desk, honours such as his Nobel certificate and even his last pack of cigarettes are among the items displayed in an exhibition that covers three floors.

Roger Allen, emeritus professor at Penn University in the United States and a prolific translator of Arab writers but especially Mahfouz, said the author was monumental “in the development of Egyptian fiction”.

“You get glimpses of his many interests. He was working on multiple tracks throughout his career.”

Allen translated a collection of his writings into English this year in a work entitled The Quarter.

The collection “reflects what a Cairene quarter looks like” – much like where the museum dedicated to him is located now.

It is also “a heavily symbolic entity associated with humanity”, Allen added. The suit and the hat of Naguib Mahfouz exhibited at the museum. Photo: AFP

“His works take on universal themes that show how to organise society and how it can be disrupted by forces,” he said.

The new collection is based on a pile of papers that his daughter found years after his death. It was organised and originally published in Arabic by Mohammed Shoair, an editor with the culture journal Akhbar Al-Adab.

He said that “in the years before winning the Nobel, he lost his eyesight so his relationship with reality was almost severed. Writing for him became an obsession.”

Shoair has been archiving Mahfouz’s papers with Om Kalthoum’s help for a multi-volume biography.

He talked about Mahfouz’s pioneering role in revolutionising the Arab novel to the extent that many Arab authors now follow in his footsteps.

Alaa al-Aswany from Egypt, Ahmed Saadawi from Iraq and Algeria’s Ahlam Mosteghanemi have all found a global readership with books that have won international awards.

“The main idea behind his work since the 1980s was returning to his childhood… his beginnings and the alley,” Shoair said of Mahfouz.

“He was talking about his personal life in a way, but through the memories of the past.” – AFP

Photo: Stock Photos from cowardlion/Shutterstock Like most public-facing places, the Ghibli Museum in Mitaka had to temporarily close due to COVID-19. However, anime fans can still have a...
Read more
- Advertisment -

The best islands for a group getaway