The victory in Saturday’s early kick-off saw the Hammers move up to eighth in the Premier League table, on 31 points, ahead of the bulk of the weekend’s fixtures.

Irish teenager Rice gave himself an early present for his 20th birthday on Monday by scoring the only goal of the game three minutes into the second half.

The defeat dented Arsenal’s bid to break into the top four, with the Gunners still adrift of Chelsea – who face strugglers Newcastle at Stamford Bridge later Saturday – in the race for a Champions League place.

West Ham named Marko Arnautovic in their starting line-up despite the Austrian forward’s brother and agent saying Thursday he wanted to move to the Chinese Super League. 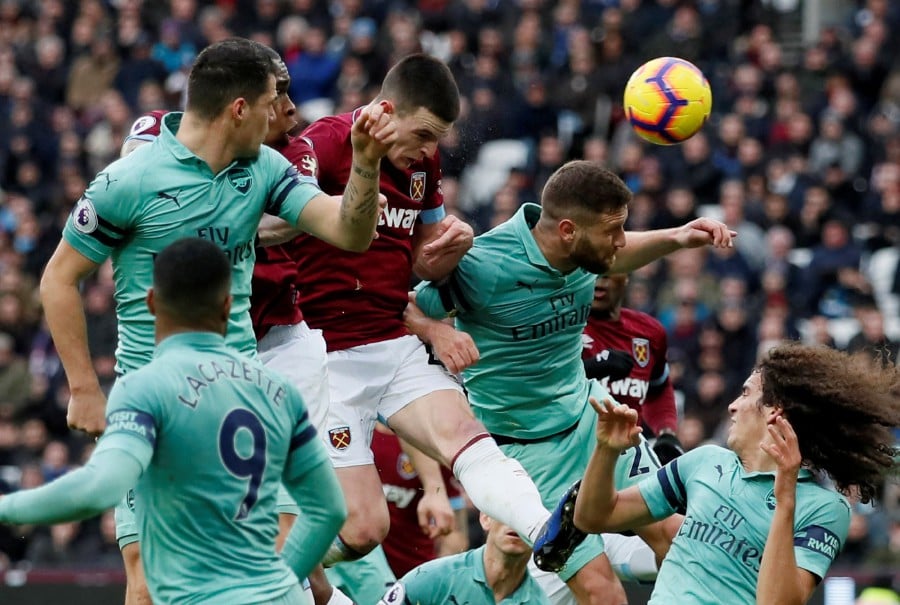 West Ham’s Declan Rice heads the ball at goal during the match against Arsenal. – Reuters

Former Arsenal favourite Samir Nasri started against his old club as the midfielder made his Premier League debut for the Hammers.

Arsenal’s Laurent Koscielny and Shkodran Mustafi returned from injury for Arsenal but there was no place in Unai Emery’s squad for Mesut Ozil.

The match was goalless at the interval following near-misses by Arsenal midfielder Matteo Guendouzi and Hammers playmaker Felipe Anderson.

That all changed in the 48th minute.

Arsenal pressed for an equaliser but the Hammers survived three minutes of stoppage time as they held on for victory.–AFP

Colleges across the country would reportedly see significant financial losses if the 2020 football season has to be canceled because of the coronavirus pandemic. According...
Read more
Sport

Premier League clubs will vote on a return to training on Monday after Raheem Sterling, Steve Bruce and Eva Carneiro warned against rushing back...
Read more
Sport

This is a lonely time for many people – football managers...

Five-star Manchester United rediscover their swagger but City are stunned