The Kerch Strait links the Azov Sea with the Black Sea. Earlier this year, the Russian government opened a 19-kilometer bridge across the strait, creating a road linking Russia’s Krasnodar region with the Crimean peninsula, which was annexed by Russia from Ukraine in 2014. 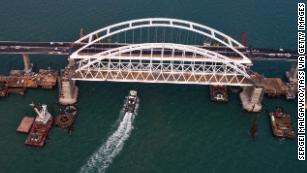 Russia’s bridge to Crimea: A metaphor for the Putin era
In a statement released Sunday, the Ukrainian ministry of defense said traffic through the strait had been blocked by a tanker anchored near the Kerch Strait bridge. Russian state news agency TASS, quoting Alexei Volkov, the general director of the Crimean seaports, said traffic through the strait had been closed for security purposes.
The incident came amid a confrontation at sea between Ukrainian and Russian vessels. According to the Ukrainian navy, the naval vessels Berdyansk,Nikopol and Yani Kapu were carrying out a planned transfer from the port of Odessa to the port of Mariupol on the Azov Sea. 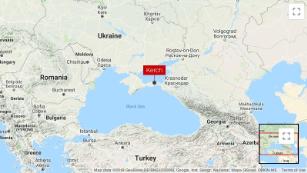 Map of the Kerch Strait
Both countries offered differing accounts of what followed. The Russian Federal Security Service’s Border Service in Crimea reported that three Ukrainian warships had illegally entered Russia’s territorial waters, and were carrying out dangerous maneuvers, TASS stated. The Ukrainian navy said Russian border patrol vessels “carried out openly aggressive action” against the Ukrainian ships, resulting in damage to one Ukrainian ship, a navy tugboat.
According to a statement from the Ukrainian military, two Russian attack helicopters were also observed tracking Ukrainian warships.
The international community has largely not recognized Russia’s annexation of the Black Sea peninsula of Crimea from Ukraine. According to TASS, a 2003 treaty confirms the Azov Sea and the Kerch Strait as domestic waters of Russia and Ukraine.
Sourcecnn
Facebook
WhatsApp
Twitter
Telegram
LINE
Viber
Pinterest
Previous articleToxic gas attack injures more than 100 in Syria, state news agency reports
Next article6.0-magnitude earthquake strikes off Colombia coast

Chinese stocks plunge into the weekend as investors sweat ahead of...