Spanish rescuers drill tunnel to search for toddler down well

A drill is seen drilling a well at the area where Julen, a Spanish two-year-old boy fell into a deep well six days ago when the family was taking a stroll through a private estate, in Totalan, southern Spain, January 19, 2019. REUTERS

MADRID: Rescuers searching for a toddler trapped for a week in a well in southern Spain began drilling a tunnel on Saturday, in the latest bid to reach the boy as part of a massive operation to find him.

Julen Rosello fell down a very narrow shaft more than 100 metres (330 feet) deep on Sunday while playing as his parents had lunch nearby in the town of Totalan near Malaga.

A giant drilling machine was installed Saturday at the site in a bid to make a parallel tunnel and excavation started in the afternoon.

“We hope to achieve this as soon as possible as conditions and that conditions from now will be a bit more favourable,” said engineer Angel Garcia Vidal, who is overseeing the operations.

The job will take about 15 hours if conditions are favourable, he said. But the chances of finding the boy alive now appear slim.

The plan is to dig a sufficiently deep tunnel after which miners will manually carve a passage to the well. 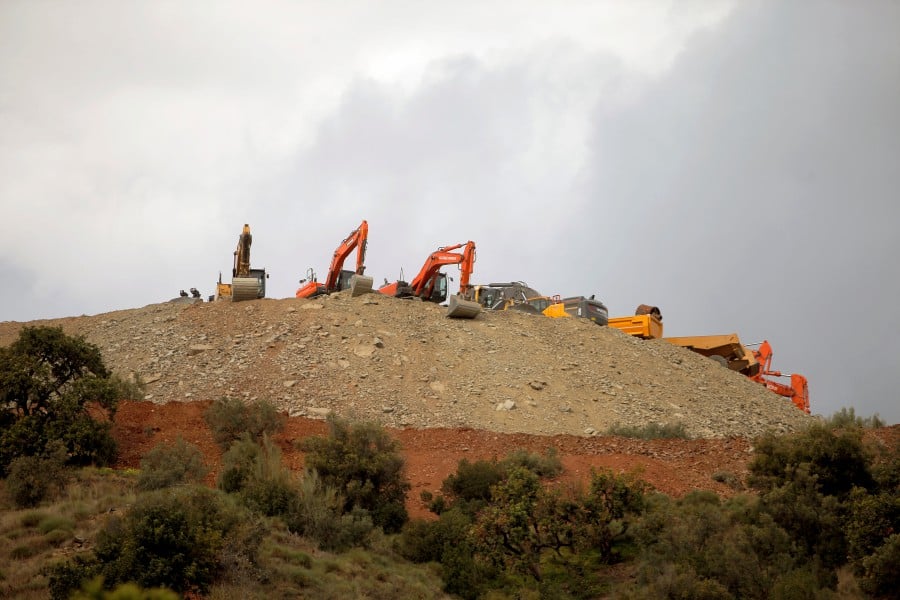 Idle diggers and trucks are seen after removing sand at the area where Julen, a Spanish two-year-old boy fell into a deep well six days ago when the family was taking a stroll through a private estate, in Totalan, southern Spain, January 19, 2019. REUTERS

“It is surprising to see so many machines, sophistication, so much energy, manpower and work deployed to make this rescue possible,” said Juanma Moreno, president of the regional government of Andalusia.

He praised a “huge wave of solidarity, involving not just local residents but people from all over Andalusia and Spain who wanted to participate.”

Spanish media, which have been covering the rescue operations round-the-clock, have reported that Julen’s parents lost another child, aged, three in 2017. The child had cardiac problems.

The paramilitary Civil Guard have questioned both parents and an entrepreneur who dug the well, a police spokesman said, adding that this was routine in such investigations.

The well was unmarked at the time of the accident and regional authorities in Andalusia said the necessary permission had not been sought before it was dug. –AFP

Sourcenst.com.my
Facebook
WhatsApp
Twitter
Telegram
LINE
Viber
Pinterest
Previous articleOscars: the show must go on… without a host
Next articleOne of America’s ‘happiest’ places will pay you US$100 to visit this winter

The German response to the coronavirus has led the way in Europe and drawn praise around the world. But that success has continued...
Read more
World

That is one piece of bad news. Some doctors had hoped the virus was circulating for many months and may have quietly infected many...
Read more
World

From Italy to Australia, critics have accused a “complacent” British government of “massively underestimating” the gravity of the coronavirus crisis after the UK reported...
Read more
- Advertisment -