A food and travel blogger in Singapore, known by her handle “sgnomster” on Instagram, recently took to the platform to reveal details on how her boyfriend had allegedly cheated on her.

She also ran an ad campaign for an Instagram story, which showed a photo of them together in better times and a caption that said:

The sponsored post was initially assumed to be a regular marketing ad. 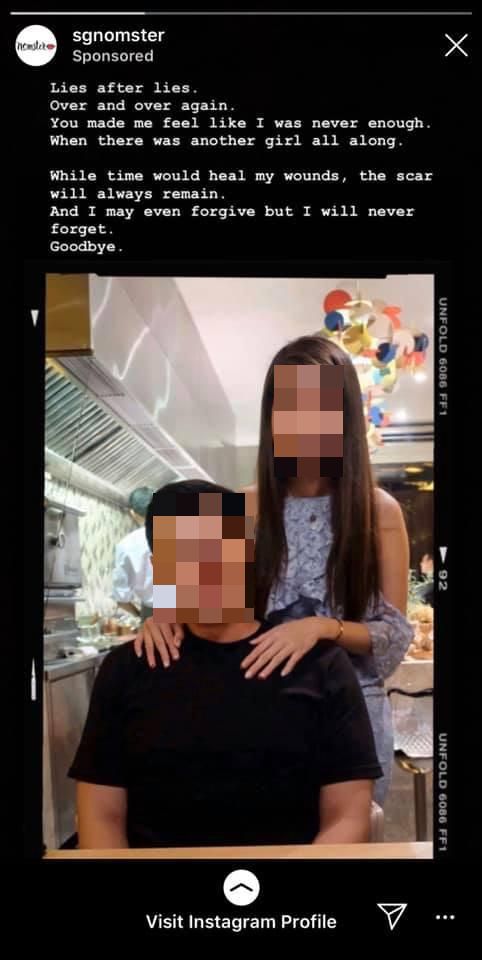 The ad apparently started running on May 3:

As of May 6, there are no more active ads by @sgnomster.

The same user also posted a series of highlights on her Instagram stories a week ago.

The stories appear to contain details on her relationship since September 2019 and the alleged cheating.

She also wrote that he told her he wasn’t seeing anyone else.

However, she suspected that he had gone on more than one overseas trip with another woman and hid it from her.

When she asked her boyfriend why her messages to him only had “a single tick”, he allegedly told her that his phone had network issues.

He had allegedly gone overseas with the woman after going to Cebu with his girlfriend. His colleague had told her that he was on “vacation” when she asked if he was overseas.

We have reached out to her for more details.

A French museum has postponed an exhibit about the Mongol emperor Genghis Khan citing interference by the Chinese government, which it accuses of trying...
Read more
General

Canada banning plastic bags, straws, cutlery and other single-use items by the end of 2021

80% to 90% of women may get cellulite at some point in their lives. And although there are many medical ways to treat cellulite, such as laser therapy, cool sculpting, or surgery, they all...
Read more
- Advertisment -

How to avoid falling for financial scams